What does ahead of the curve mean?

better than others or more advanced

The Joker: I don’t wanna kill you. What would I do without you? Go back to rippin’ off mob dealers. No. No. No. No. You… you complete me.

The Joker: Don’t talk like one of them, you’re not! Even if you’d like to be. To them, you’re just a freak, like me. They need you right now. But when they don’t, they’ll cast you out, like a leper. See, their morals, their code… it’s a bad joke. Dropped at the first sign of trouble. They’re only as good as the world allows them to be. I’ll show you, when the chips are down, these… these civilized people? They’ll eat each other. See, I’m not a monster, I’m just ahead of the curve.

The Joker: You have all these rules and you think they’ll save you!

Batman: I have one rule.

The Joker: Oh, then that’s the rule you’ll have to break to know the truth.

The Joker: The only sensible way to live in this world is without rules. And tonight you’re gonna break your one rule.

Nick Fury: These new long range precision guns can eliminate a thousand hostiles a minute. The satellites can read a terrorist’s DNA before he steps outside his spider hole. We’re gonna neutralize a lot of threats before they even happen.

Steve Rogers: I thought the punishment usually came *after* the crime.

Nick Fury: We can’t afford to wait that long.

Nick Fury: After New York, I convinced the World Security Council we needed a quantum surge in threat analysis. For once we’re way ahead of the curve.

Steve Rogers: By holding a gun at everyone on Earth and calling it protection.

Nick Fury: You know, I read those SSR files. Greatest generation? You guys did some nasty stuff.

Steve Rogers: Yeah, we compromised. Sometimes in ways that made us not sleep so well. But we did it so the people could be free. This isn’t freedom, this is fear.

Nick Fury: S.H.I.E.L.D. takes the world as it is, not as we’d like it to be. And it’s getting damn near past time for you to get with that program, Cap.

George Carlin: I’m a modern man. A man for the millenium. Digital and smoke free. A diversified multicultural postmodern deconstructionist, politically, anatomically, and ecologically incorrect. I’ve been uplinked and downloaded, I’ve been inputted and outsourced. I know the upside of downsizing I know the downside of upgrading. I’m a high tech lo-life. A cutting-edge, state-of-the-art, bi-coastal multitasker and I can give you a gigabyte in a nanosecond. I’m new wave but I’m old school and my inner child is outward bound. I’m a hotwired, heatseaking, warmhearted cool customer, voice activated and biodegradable. I interface with my database and my database is in cyberspace, so I’m interactive, I’m hyperactive, and from time to time I’m radioactive. Behind the eight ball, ahead of the curve, riding the wave, dodging the bullet, and pushing the envelope. I’m on point, on task, on message, and off drugs. I got no need for coke and speed. I got no urge to binge and purge. I’m in the moment, on the edge, over the top, but under the radar.

Submit Ahead of the Curve Idiom Examples 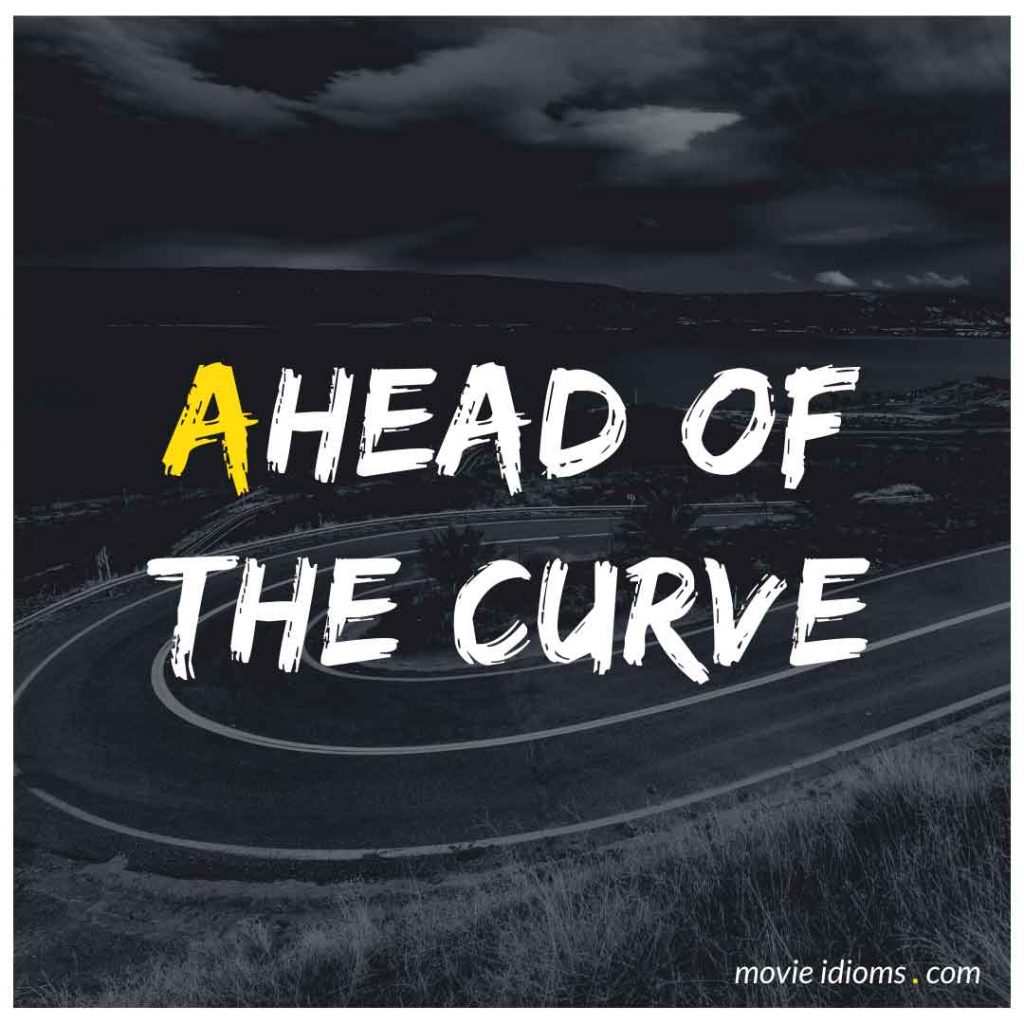 The Simpsons "When Flanders Failed" (1991) The fly was funny, but the booger was the icing on the cake. — Homer Simpson
Saw (2004) Rise and shine, Adam. You’re probably wondering where you are. I’ll tell you where you might be. You might be in the room that you die in. — John
Grey's Anatomy "Take it Back" (2014) We are too often letting our personal lives disrupt our work. None of us are guilt-free. Myself included. Now, HR have recommended a clear, zero-tolerance policy. — Dr. Owen Hunt
Close
Menu
wpDiscuz
0
0
Would love your thoughts, please comment.x
()
x
| Reply